Sixteenth Watch: A colloquial term to refer to any military duty anywhere in space. It refers to the 16 sunrises seen on the International Space Station (ISS) in a single Earth Day.

A lifelong Search-and-Rescue woman, Coast Guard Captain Jane Oliver is ready for a peaceful retirement. But when tragedy strikes, Oliver loses her husband and her plans for the future and finds herself thrust into a role she’s not prepared for. Suddenly at the helm of the Coast Guard’s elite SAR-1 lunar unit, Oliver is the only woman who can prevent the first lunar war in history, a conflict that will surely consume not only the moon, but earth as well. 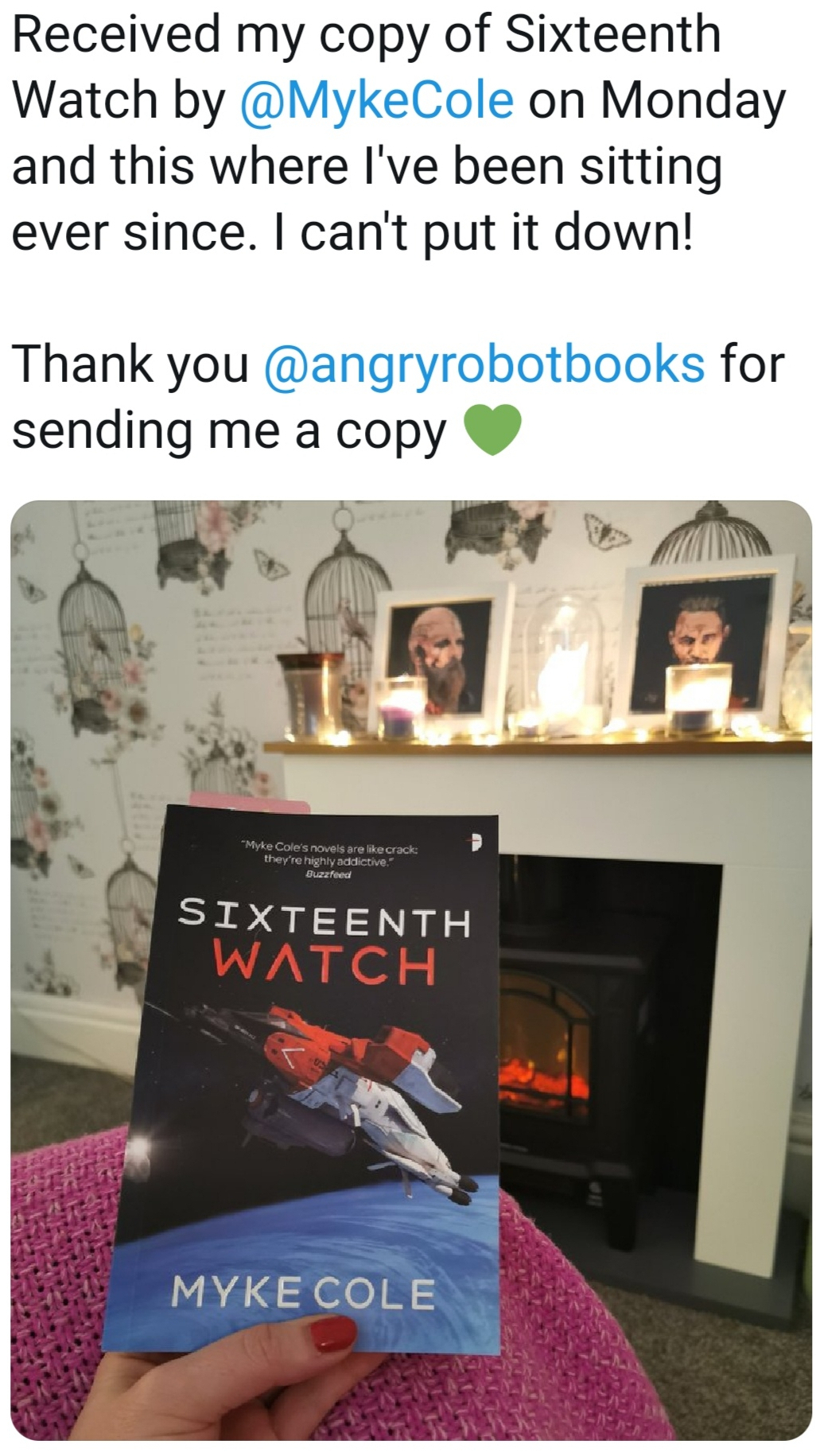 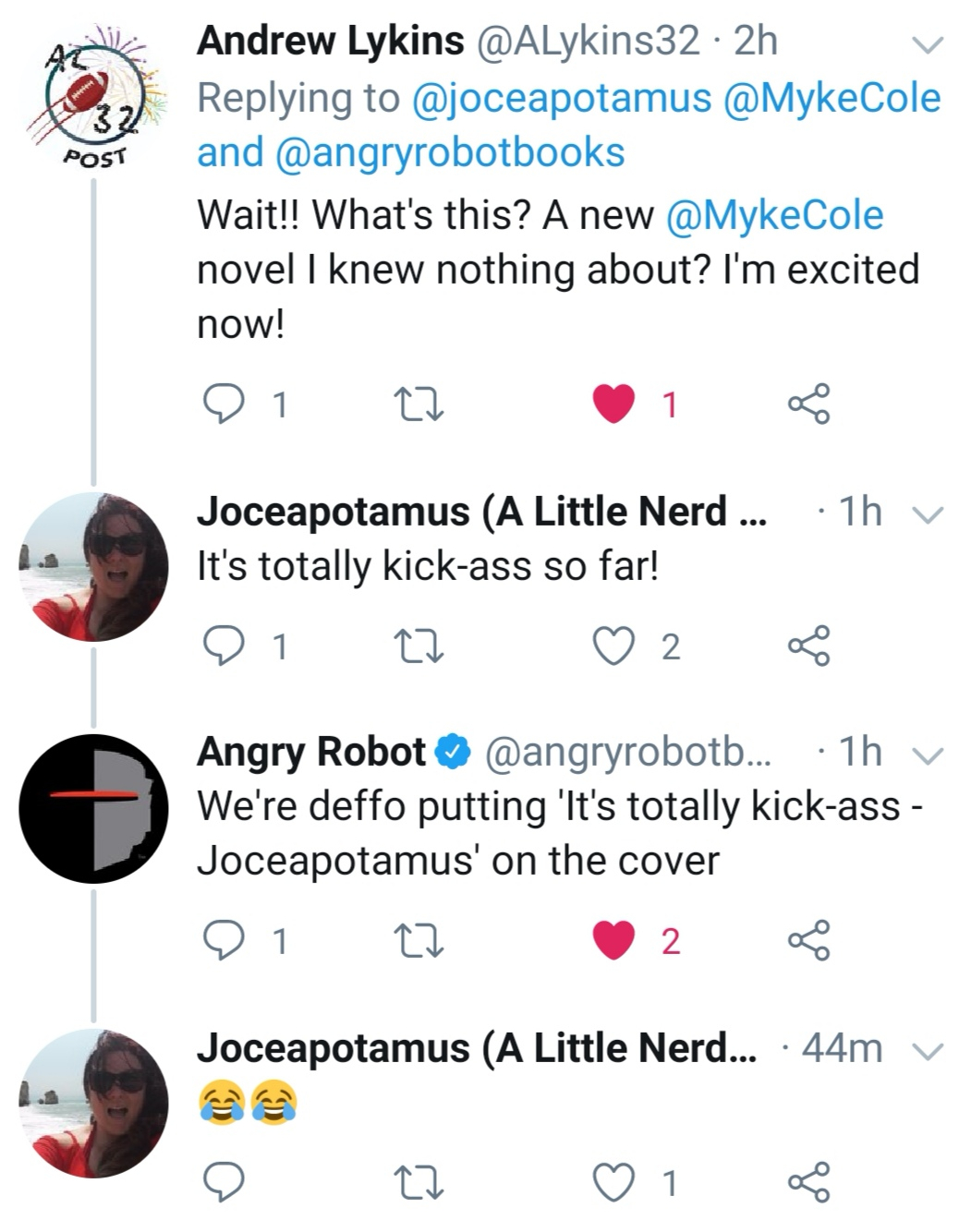 I finished reading Sixteenth Watch a couple of weeks ago but as you’ve probably noticed from some of my recent posts I haven’t been able to stop talking about it. It completely blew me away from start to finish.

Military science fiction is my absolute favorite genre to read because it has the ability to fully take me away as a reader. Not only can I lose myself in a place so different than the one I’m in, I can often feel myself there amidst all the non-stop action. Plus, I like all the explosions.

From the get-go Sixteenth Watch starts out with a bang, the action already in full swing upon the surface of the Moon. Even though the Moon was supposed to be a new start for humanity, it didn’t exactly pan out that way. We are humans after all. It is supposed to be a neutral zone not owned or controlled by any one country, but where there’s money to be made you can be sure that everyone completely ignores those rules.

Because of the vast resources on the moon, countries are in a non-stop tense standoff over territorial rights, especially between China and the United States. As a result, military branches are near the breaking point against each other and seem to be itching for all out lunar war. That is, except for the United States Coast Guard.

One of the aspects I found most fascinating about this story was the positioning of the Coast Guard. I’ll fully admit that I didn’t know as much about the Guard as I should have, but Myke Cole has certainly remedied that. His background within the Guard added a lot of authenticity to the story.

Their main objectives are to de-escalate and protect boundaries so it stands to reason that their mission statement is perfect for protecting Americans on the moon. I felt a little silly when this was discussed in the book because OF COURSE they would be the ones best suited for this. Whenever you read about militaries in space it’s always branches that are very “oorah!” but it sounds like we should be sending Coasties out there to prevent situations from blowing up out of proportion.

Bearing that in mind, you’d think the Coasties would have more power on the moon to handle the constant tensions, but nope, the big guns keep stealing the show. With the Coast Guard facing being made completely irrelevant on the moon at the cost of countless lives, it is up to our formidable main character Captain Jane Oliver to try to set things right. She is brought out of near retirement to push the Coast Guard to the forefront by ensuring their team comes in first on a televised military game show. Yep, you heard me right.

Forget the Super Bowl. The biggest athletic event out there is a yearly boarding action competition among the military and law enforcement branches in space. Millions of people watch each year and whoever comes out on top ends up being utterly revered back home on Earth. That reverence is more than just a trophy as it ultimately gives the winners a lot more power on the lunar stage. Win the game, save the world.

“What do you want me to teach these guys to do?”

“We need you to get them in shape for this year’s Boarding Action. Commandant thinks if we win, it’ll give us the hand we need. It’s a major media event, watched by millions of Americans. If we win it, that’ll give us the leverage we need to stay on, and if we stay on, we can keep the Navy from turning quarantine-runners into a pretext for war.”

Oliver blinked. “We’re going to stop a war… by winning a game show?”

It’s not just incredible action sequences or zero gravity training montages, though. Myke Cole has written a fully rounded out novel packed with compelling characters, honest and raw emotions, and a camaraderie that felt truly genuine. I really connected with the characters and there were so many bad-ass women out there, too! I’d love to find out more about them all, especially those we were only briefly introduced to from the Marine Corps and the Navy.

If Sixteenth Watch ends up being a standalone I’m happy with how the story ended. However, it has definitely left itself open to further installments and I am 100% here for it if there are sequels. I’m really hoping there will be more, but for now this book has easily won itself a spot atop my “favorites” shelf. It was released earlier this week so if you haven’t already bought a copy, what are you waiting for? Like, seriously, stop reading this and go buy a copy right now!

I’ve noticed some reviewers mention that the use of military jargon and acronyms without explanations was a little difficult to cope with. Personally I agree with the author’s choice of not explaining each term as they came up so as to keep the narrative’s flow going. Most of the terms were easy enough to decipher through context but there’s a glossary at the back and lordy am I sucker for a good glossary. So never fear readers, with your glossary in hand you’ll soon be fluent in lunar military speak.

On a side note, for our first anniversary, the “Paper Anniversary,” my husband gifted me a deed to some land on the moon. I’m a Lunar Lady! Given that its inevitable humans will eventually go to the moon and ravage its resources, I’m now seriously hoping the Coast Guard will be there to protect my land. 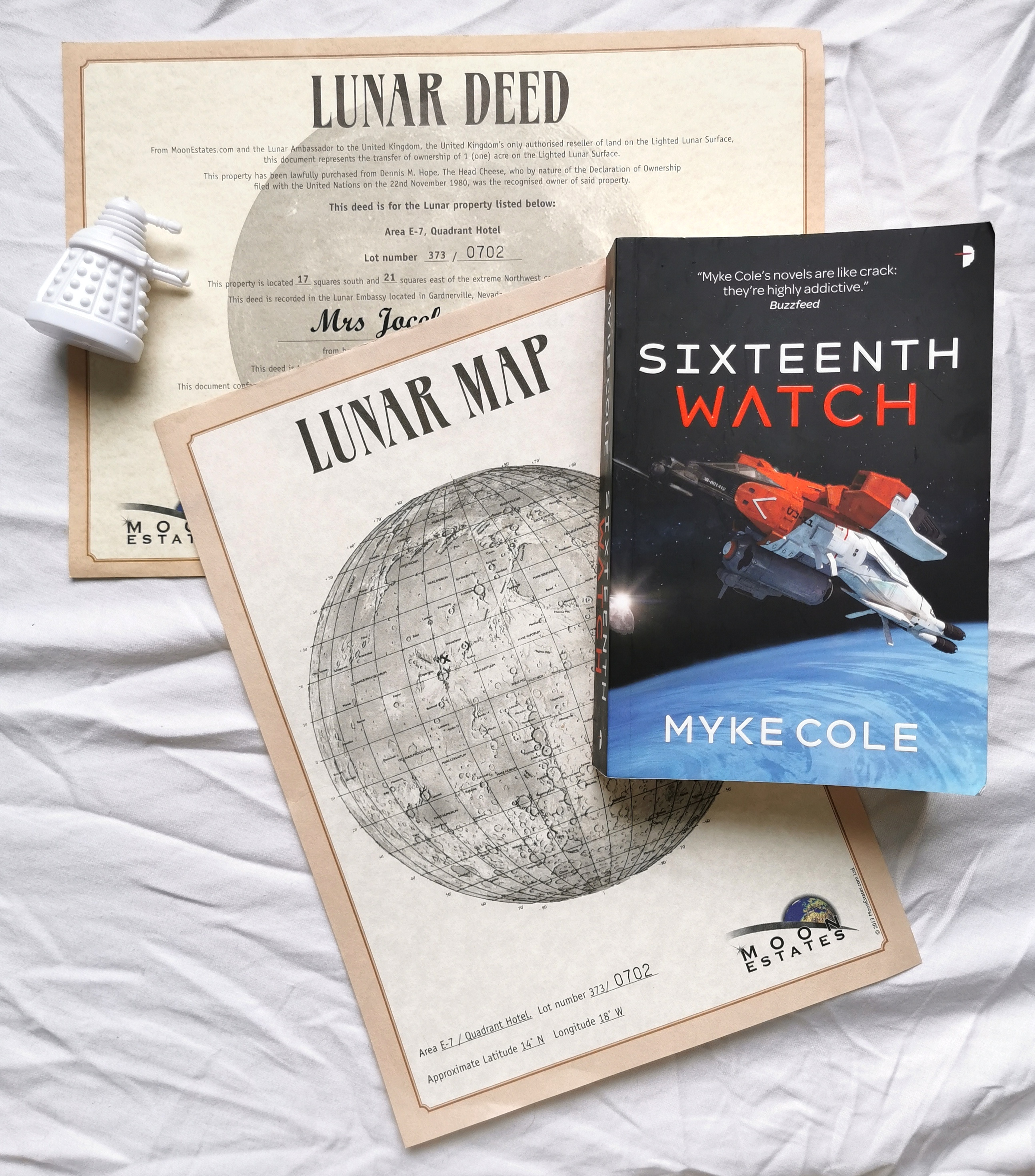 I use our telescope often to look up at the Moon and have been out there a lot more lately because of the prominent full moons we’ve been having. Thanks to Myke Cole and his knock-out book I now not only have a much deeper appreciation for the U.S. Coast Guard, but I have found myself gazing up at those distant craters in a whole new way. We will get back to the Moon again someday and we can only hope that people like Captain Jane Oliver will be up there with us.

Thank you to Angry Robot for sending me a copy of this book in exchange for a review.