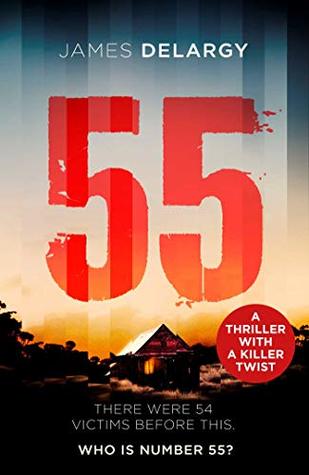 I’m always wary of books claiming to have twists because usually you can see the “twists” from a mile off, but with this one I kept second guessing myself. It’s a really unique take on the thriller crime genre, not only in its location in the harsh Australian outback, but in that we have two men claiming to be the victim of a heinous kidnapping and attempted murder. Except one of them is lying and the other one is the killer.

Chandler Jenkins is the Police Sergeant of a remote town in the Australian outback where the majority of his job is dealing with farmer disputes and noise complaints. A single father, Chandler is mostly happy with his simple life. Then everything is turned upside down when a bedraggled, blood soaked man stumbles into the station begging for help.

Named Gabriel, he claims to have been drugged and kidnapped by a man called Heath while hitchhiking just outside of town. When he came to, he was bound in a remote cabin where Heath informed him would be the 55th victim. By a stroke of luck, Gabriel managed not only to break free but to survive the unforgiving elements to get back to civilization.

It’s a wild tale, one Chandler isn’t sure whether to take at face value or not. How could a serial killer have murdered 54 people in his backyard without him or anyone else noticing?

Before he can investigate any further, another man in a similar state comes into the station telling the exact same story word for word- except that he’s the victim. Calling himself Heath, he swears he’s the actual victim and that Gabriel is the one who took him.

Which one is it? Gabriel, Heath, both of them, neither of them?

Soon Chandler is in over his head. After calling in for reinforcements, his past comes crashing down around him when his former best friend Mitch, a hot shot police official in the big city, swoops in and takes over the case. Now not only is Chandler’s career on the line, but soon his family is in the cross hairs too.

55 is a slow burn with a solid pace. It flips between present day and a harrowing period in Chandler’s past. Even though the flashbacks didn’t seem so at first, they ended up being devastatingly relevant not only to show the history between Chandler and Mitch but also to bring the events in their lives full circle.

Throughout the book I found myself really rooting for Chandler and totally sympathized with his rage and irritation at the way that pompous ass Mitch was parading around. God how I wanted Mitch to somehow be the killer as I was reading this.

By about the halfway point, it became pretty clear to me who the culprit was but that didn’t really diminish how much I was enjoying reading this thriller. It took some interesting turns that kept me reading late into the night.

The only thing that really irked me about this book was a part of Chandler’s backstory. He is presented as this typical “good guy” single father we’re supposed to like, but we find out early on that the mother of his children was underage when they started dating. He was an adult, A COP, who went to break up an underage boozefest and instead he starts drinking with his future wife- only to get her pregnant a few months later. This episode is described nonchalantly and is quickly glossed over, which makes it even worse. In this day and age, why write this? It added nothing to the story and made me really dislike Chandler and the author for awhile. The Woody Allen stuff isn’t okay anymore (not that it ever really was).

I’m not going to lie, that ending was gut wrenching. Endings like that I expect in the genre I usually read, sci-fi, but crime thrillers are almost always neatly tied up with a predictable bow by its conclusion. I was fairly taken aback by this at first but the more I think about it, the more impressed I am with the bold and ambiguous direction the author chose. I hope they don’t change it when the movie comes out.

Assigning a star rating to this has been difficult, I kept going between 3 and 4 stars but I eventually landed on 4 because while I have some issues with the book, they haven’t really affected the overall impact it left on me. I read this a few months ago, but from time to time that ending creeps up on me and I’m hit like a freight train all over again. I liked the setting, it was a unique story, and even though I’m still miffed about the underage stuff, James Delargy really sucked me into his dark tale.

Already optioned for a movie, 55 is available now online and in print.