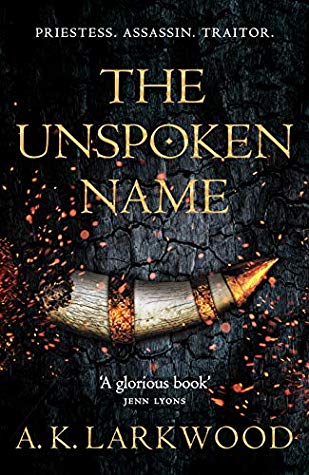 What if you knew how and when you will die?

Csorwe does–she will climb the mountain, enter the Shrine of the Unspoken, and gain the most honored title: sacrifice.

But on the day of her foretold death, a powerful mage offers her a new fate. Leave with him, and live. Turn away from her destiny and her god to become a thief, a spy, an assassin–the wizard’s loyal sword. Topple an empire, and help him reclaim his seat of power.

But Csorwe will soon learn–gods remember, and if you live long enough, all debts come due.

Disclaimer: this will be a lengthy review because of how utterly incredible this book is.

As I recently mentioned in my review of The Wolf of Oren-Yaro, I lost my enthusiasm for the fantasy genre a couple years ago after feeling like everything being published was the same fantasy story formula over and over ad nauseam. I still picked up the occasional book here and there but nothing really blew my socks off- that is, until recently.

I’m thrilled to announce that I’ve started 2020 by reading two utterly outstanding fantasy novels and both were written by women which makes the development all the more satisfying. I really hope this is setting the tone for my reading year, nay, the reading tone for my decade. I’m so happy to finally be excited by the fantasy genre again.
The Unspoken Name was released earlier this month but I’ve been struggling to write the review I feel it deserves. If I had written a review right after I finished the book it would have just been incoherent noise of elation because I seriously could not put into words how much I loved the book from start to finish.

I had high hopes for this story before starting it because I’ve always loved orcs. I choose orc characters whenever I play any kind of role playing game because I think that not only are they powerful, awesome, and fun to be, but that there’s a lot more to them than people expect when they see them.

Well, let me just say this book exceeded all my expectations.

You start out thinking most of the book will follow Csorwe on her new path with the mysterious wizard who saves her from her brutal sacrificial fate. His motives for freeing her aren’t quite clear at first, but it seems to have something to do with the quest he’s on to reclaim his kingdom.

However, as we continue following Csorwe we find there are many forks in her road that are fraught with drastic twists and turns. Twists and turns that no one could have seen coming, let alone the girl who had up until her rescue only known a sheltered life that was preparing her for a premature death.

It was almost as if there were several books within just this one, but it never dragged or became overwhelming. It was structured so that you were an excited participant along Csorwe’s ever evolving journey.

This was helped along not only by the humor and action throughout the book, but also by the compelling cast of characters. Especially the women who were all pretty bad-ass! Don’t get me wrong- the men were cool too, but it was the female characters were really running this explosive show.

One aspect I enjoyed was seeing how these characters grew and developed when given the opportunity to do more with their lives than what was previously expected of them. Alliances and friendships were constantly evolving as well as the characters began to realize that the ones they needed to trust most were the ones they were most afraid to.

At times I was a little irritated at Csorwe for trying to force change and freedom on one of the characters, though. I completely understand where she was coming from given her own experiences, but doesn’t freedom also give you the choice to stick with the path you had already been on?

The character kept trying to tell Csorwe exactly that, but she just wouldn’t take no for an answer. In the end I’m glad she didn’t, but it still felt a bit like, “Okay, but this is a different person from a different culture- let them actually make their own decision about their fate even if you don’t agree with it.”

People are complicated, though, which I think was the heart of this story. Heroes can be villains and villains can be heroes, with most of us falling somewhere in between. Who would we be when faced with adversity and unexpected situations? Because what you think you know about yourself and your world can be turned completely on its head in an instant, making you question your entire purpose and who you thought you really were.

Who would you become if you could chose your own destiny?

Tl;dr: This is a freaking awesome and well developed fantasy novel that made me love the genre again

Special shoutout to the glossary and index of characters at the beginning. Man, do I love a good glossary, especially one with pronunciations. It really helped in particular with this story and its unfamiliar fantastical names and locations.

I’m sure you all know the feeling when you’ve been reading a character’s name a certain way in your head (or just reading it as gobbledy gook) and then you hear the correction pronunciation:

I’m still not sure I’ve adequately expressed how much I enjoyed The Unspoken Name. It was just so damn impressive, immersive, and wonderful. It seriously has everything: spectacular worldbuilding, complex characters, heart-pounding action, and a well written plot. What more could you want?

One aspect that has been getting a lot of attention is the relationship Csorwe has with another woman. I’ve seen a lot of people call this a fantasy with a “sapphic love story” and while this is technically true, I’m not sure the relationship needs to be qualified like that.

Much like the storyline, sexuality and gender seems to be refreshingly fluid in The Unspoken Name. People are who they are and have relationships with whomever they’re attracted to whether it’s the opposite sex or the same sex. It’s never anything that’s ever explicitly discussed, it’s just how it is. Honestly, we could all learn a lot from these orcs.

3 thoughts on “The Unspoken Name (The Serpent Gates #1) by A.K. Larkwood”